Perth Glory’s Hyundai A-League season has come to an end after going down to Premiers, Sydney FC 3-0 at Allianz Stadium, in the first semi-final tonight.

Josh Brillante got the Sky Blues off to a flying start with a long range shot which rocketed past Glory custodian Liam Reddy, before Sydney on two more occasions in controversial circumstances with the assistance of the VAR (Video Assistant Referee).

It was a tentative start from both sides, with Sydney controlling possession, but Perth always looked dangerous on the counter through Andy Keogh and Diego Castro with a frantic battle for midfield dominance.

Brillante, pierced the cagey nature of the game with his long-range strike in the 21st minute.

Liam Reddy came to the rescue just moments later with Brazilian forward Bobô’s shot from close range on the left-hand side of the box forcing the shot-stopper into a phenomenal stop.

Glory weathered the storm following the opener, with the defence holding firm and enabling the visitors to launch a series of attacks with Joel Chianese central. 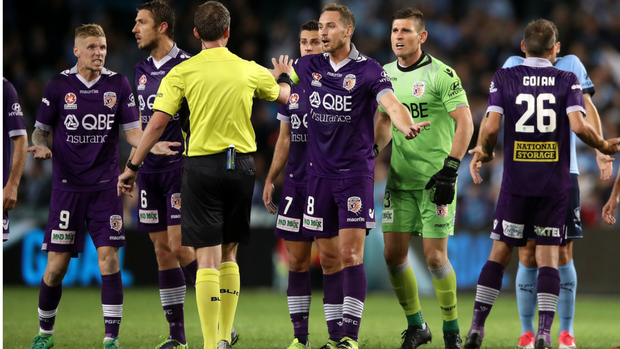 The hosts doubled the lead in controversial fashion after Bobô was judged offside in the build up to Jordy Buijs’s goal. The contact between Djulbic and Bobô came into question, but the VAR ruled it blatantly clear and insignificant to the play, so the referee’s decision was surprisingly overturned.

The controversy and use of the video technology didn’t stop there, with Filip Holosko’s headed goal originally ruled offside, but was then overturned to make it 3-0 on the stroke of half-time.

Glory burst out the sheds in the second-half with Josh Risdon’s superb ball through to Castro on the right-wing, but the Spaniard’s cutback iwas struck over the crossbar by Andy Keogh. The Irishman was in the thick of it again in the 58th minute, with his reaching header from Lucian Goian’s cross hitting the upright and out for a goal kick.

Perth continued to strive to peg the deficit back, with Keogh on the end of a few half chances but to no avail.

Glory will wrap up its season at the club’s annual Most Glorious Player awards night on Saturday May 13.

Tickets to the gala event can be purchased HERE.

21′ | GOAL – Josh Brillante thumps a long distance strike to open the scoring for Sydney FC.
23′ | Bobô almost doubles Sydney’s lead with a close range effort, but Reddy was equal to the task with a superb diving save to deny the Brazilian.
26′ | Bobô again forces a great save from Reddy, with the keeper palming out for a corner.
45′ | Holosko heads over Reddy to make it 3-0, with an original offside ruling overturned again by the VAR.

58′ | Goian’s whipped cross from the right-wing skims off the turf and is met by Keogh, but his header smacks the upright and out of play.
68′ | Reddy denies Alex Brosque from just inside the box with a straightforward save.
69′ | The gloveman is called upon again, this time stopping substitute Bernei Ibini-Isei one-on-one.